When Anything Anything started in 2008, I didn’t think I’d end up doing even a first anniversary concert, you see, the show did very poorly in the ratings it’s first few months were disasterous, I literally made everybody who was listening to regular programming on WRXP, turn off their radios when my show began, and then turn them back on when it ended. It was that bad. I assumed I was doomed and the show would be a short lived lark. I mean who could blame the station if they dumped the show, they had numbers to prove how bad it was doing and I would’ve had no argument or compelling reason to have them keep it on.

But then something interesting happened, the audience started to grow every month, emails were pouring in, packages of cd’s from area bands started to flood the mailbox, people started coming to shows, and it steamrolled and kept rolling, winning it’s time slot in many demographics, there was actually one month where I was #1 in teens and #1 in adults 35-64, just crazy. I was beating the other rock station in town, in 17 of 18 demos consistently (I don’t why the demo of Adults 65+ never fully came on board!), I was the only time on the station that showed this growth. It was because new listeners found the show. All those people I scared away those first few months were replaced tenfold by new listeners and eventually I got those original listeners back too. That station got sold and my show kept going, The Peak, WDHA, The Rat, The Gamut, The Shark, Lazer, Rock 102, KTRX, and now WMGM in AC are on board with more to come

I did anniversary shows with Dramarama of course, as the years went on, Social Distortion did an anniversary show for me, Joan Jett and the Blackhearts did too, Jesse Malin was part of that one, Girl in a Coma was part of one, Tegan and Sara in the week they broke the top 40 played an anniversary concert for me, and Willie Nile and Plastiq Passion opened that one, which was a bill that completely made sense for my radio show, people who didn’t know about my radio show were baffled by such a bill. It sold out and all that attended loved it.

Which leads me to the other anniversary show I’m doing this year and it’s going to be at the Count Basie Theatre in Red Bank on 10/27, and I’ve got two of my favorite up and coming bands on the bill as support, The Battery Electric and The Hell Yeah Babies, and when you see who the headliner is, you’ll probably scratch your head like some did when I had Willie open for Tegan and Sara, but this triple bill will be an amazing night, trust me on that. You’ll never walk out of an anything anything show disappointed.

And to even make this more exciting and unprecedented, the fine folks at the Count Basie, have let me do a presale that begins Monday at noon, and this is not your “generate hype presale” where 50 tickets go onsale and then you get all panicked to buy tix in the general onsale, this presale is the whole place, pick your seat if it’s available and if it happens to sell out before the public onsale, so be it. That’s right my fans get access to the entire theatre.

So let’s get to this show on 10/27 at the Count Basie and the headliner, if you are fan of my show, you’ll understand the connection not only all genres, but that of pop culture, I’m a big believer in the what we grow up with can translate to joy all through our lives. Artists that capture our eyes and ears when we are younger stick with us forever, and now as we start the inevitable loss of those artists, like Bowie, Glenn Frey, Lemmy, Prince etc, it makes us more urgent to see as many of those artists as we can when they come around.

If you talk to most women who were kids in the 70’s, it’s pretty much a safe bet in their locker or over their bed, they had a picture of a certain teen idol there. If you ask most guys who were kids in the 70’s, most likely they loved this teen idol’s attitude on his TV show, loved the sarcasm of his character and probably wore pooka beads because of him. and we all loved that music.

as a teen idol, he was the biggest one in the early post sexual revolution days, he was the first one that people saw in “color” on TV.

on that alone, he’s a must see, but when then realize his live show is spectacular and fun, of course anchored by some bubble gum hits, it also veers into deep cuts from some of his solo albums that are underrated, it includes covers that come out of left field, I mean he broke out a guitar and wails away on BB King’s Sweet Little Angel. Mind Blowing.

so it is my great pleasure to announce that one of my 8th Anniversary shows this year will be headlined by the one, the only, DAVID CASSIDY

here’s the ticket info and pricing:

the entire inventory is made available to you Monday at Noon, choose your own seats Password: Anything

the general onsale is friday 8/5 at Noon 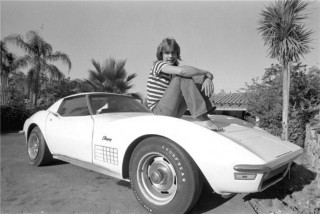