Why Jon Bon Jovi is wrong about Steve Jobs

In a Sunday Times interview that ran this past weekend, fellow Jersey boy, Jon Bon Jovi has stated that:

“Steve Jobs is personally responsible for killing the music business”

And he points this out in the article:

“Kids today have missed the whole experience of putting the headphones on, turning it up to 10, holding the jacket, closing their eyes and getting lost in an album; and the beauty of taking your allowance money and making a decision based on the jacket, not knowing what the record sounded like, and looking at a couple of still pictures and imagining it”

But Steve Jobs had nothing to do with kids not holding up jackets, the record labels did.

and they have systematically done that for years as they looked to eliminate vinyl with their 12 inch beautiful album covers with gatefolds, liner notes and lyric sheets by replacing it with inferior sounding, cheaper to make alternatives that they convinced us to pay more for, 8 tracks, Cassettes and of course the CD.

The CD killed the music business, the labels doubled the price of music, made a body of work 70 minutes vs. 40 minutes (which of course made it tougher to have a great album, in essence every release became a double album), made it not only more portable, it created something you could easily skip tracks and duplicate without any quality loss, which of course led to high speed pirating of that music. As well as the endless re-releases and bonus track editions of popular albums and of course something that Jon Bon Jovi is guilty of, the greatest hits collection that somehow merits a new track that obviously wasn’t a hit.

None of that is Steve Jobs’ fault.

And more food for thought for Jon Bon Jovi, he wants kids to have the experience of holding the jacket, yet every album he’s released since 1992 has not been available on, you guessed it, VINYL!

and also he’s been selling his music on Itunes including some digital only bonus tracks, so if Steve Jobs is a Killer, is Jon an accomplice to murder?

speaking of an album cover worth holding and imagining things about, here’s the original cover of Bon Jovi’s slippery when wet: 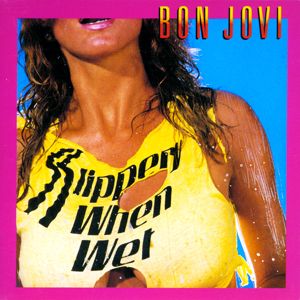