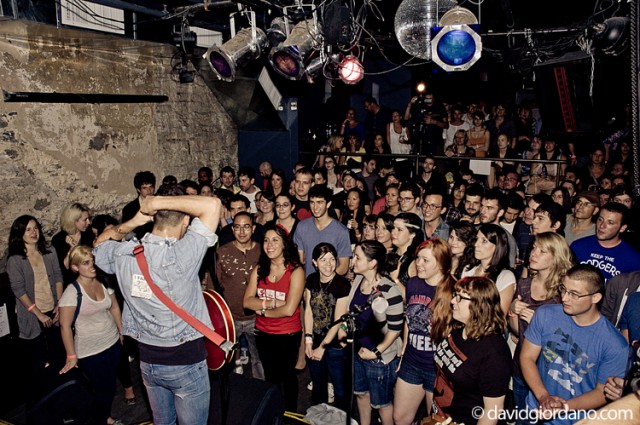 The young band rocked the stage their punk sound and teen angst energy. The singer, had the moves of Mick Jagger with the edge of Joey Ramone, he really got the small crowd pumped. He danced all over the stage and at times made his way to floor of it, singing with lots of drama. The band members, each made their way into the crowd at one point to share the vibe with everyone there. When their time was up, and the music stopped, I realized how unbelievably loud Wildlife was. I am sure I speak for everyone when I say, my ears felt like they were going to bleed. The time between sets went fairly quick since the same equipment more or less was used for each band.

The next to take the stage with poppin’ morale was Max is King. A band that has a musical style of U2 meets train. As any pop-rock show would go there were lots of smiles and dancing. The crowd was noticeably larger, a lot of them probably were there just for Max is King. I was able to spot at least 15 people who sang the lyrics word for word, and were in the same musical zone as the band. The singer was making jokes in between songs, connecting with fans in the crowd and had a smile that did not leave his face the entire set. All the while, the other band members smoothly played and followed the singers blissful lead. After a refreshing set from Max is King, now we were ready for some Steel Train.

As soon as I turned away from the stage to get some fresh air, I was shocked to see that the Bowery Electric was completely packed. Not only was it filled, but it was filled with a crowd that I would likely see in New Jersey. The crowd clad in flannel, plaid shirts and baseball caps were positively there to see the Steel Train; a New Jersey based band. Within 20 minutes, the down to earth band members ran out individually to do their thing onstage. We were all ready for the show they were about to put on, but I know I speak for everyone when I say, I was blown away by their natural talent.

Each song was played with equal amounts heart and ability. The indie style of music that came of the speakers kept heads bopping and feet tapping. The band played all of the crowd favorites some of which included, Kill Monsters in the Rain. Firecracker, I Feel Weird, and The Road Song. The most memorable one for me was the raw, country-esque feel of The Road Song. The whole band gathered in a huddle, and sang the acoustic song all together.

The sincerity in the singers voice as he thanked us for being there throughout the performance actually moved me. I remember thinking to myself, if only more musicians connected with their audience the way they did. After their set, they came back with a few more encore songs. I felt like I knew who the band really was after seeing them play live. Honesty is rare to find in a group of talented musicians, but this band defines the word.

Below is a gallery of photos taken by David Giordano.